You probably know the saying ”˜don’t judge a book by its cover’. It’s not really about books at all, of course ”“ it’s about first impressions. But the cover is most readers’ first impression of a book and so it is the publisher’s main weapon in marketing terms. A good cover design calls out to readers from the screen or the shelf. It offers visual cues to spark curiosity, and ”“ hopefully – makes the reader want to pick the book up and dive right in.

So where do we start?
Barrington Stoke’s cover designs fall broadly into two types ”“ illustrated and non-illustrated. For the most part we use illustrated covers for illustrated books, and the same artist creates the illustration for the cover and the inside pages. Sometimes we ask an artist to create a cover illustration for us even when a book does not have any pictures inside, but for the most part we create covers for these books using typography, photography and design elements. Whether a cover is illustrated or not, lots of design work is required to pull it together into a printer-ready file. This work is done for us by our amazing cover designer Rich.

Illustrated jackets
Sometimes we have a very strong idea of the image we want on the cover of an illustrated book. This may be because we want the book to tie in with another book in the same series or by the same author, or it may be that one of the team has an idea that we feel would work especially well. Often, though, we ask illustrators to send us a series of rough sketches and we look through these, send feedback and work together to hit on the final image.

Here are a series of rough images by Stefano Tambellini for a new edition of Ghost for Sale by Terry Deary (spot how Stefano has flipped one of the images ”“ letters and all ”“ to give two layout options):

In the end we decided we liked the little, slightly sad-looking ghost in the first image best, we felt the composition was stronger and we liked the way Stefano had centred the reflection in the mirror. Stefano is now working the image up to final – keep an eye out for the full jacket soon.

Some illustrators hit the design dead-on, first time. Here is the ”˜rough’ Vicki Gausden sent us for The Haunting of Uncle Ron by Anne Fine, beside the final: 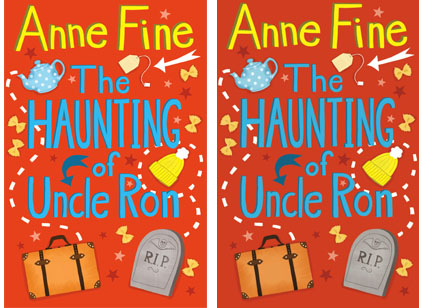 Sometimes all we ask to tweak is colour. Here are three different versions of Itch Scritch Scratch by Eleanor Updale and illustrator Sarah Horne. We liked all of these but in the end we went for the jolly yellow:

We ask for the author’s feedback at various stages, and we also ask our sales agency, who in turn ask important customers for their thoughts. After feedback from booksellers, for example, we worked with illustrator MÃ³nica ArmiÃ±o to change the warm tone of the original cover for our forthcoming picture book from MÃ³nica and Cornelia Funke to a cooler, night-time palette to up the magic factor:

Sometimes we create a cover concept around a smaller item of artwork. Here is Wolfman by Michael Rosen and Chris Mould. The first picture is the rough initial concept we created for the jacket, using a vignette illustration by Chris. The central image is an early draft with stripes, a small shadow and a very BIG Wolfman. The last image is the final jacket ”“ with added ”˜claw marks’ and a tagline.

Lettering is very important ”“ we think about style, colour and placement. Some illustrators, like Sarah and Vicki, do their own lettering. Often, though, Rich adds lettering to artwork for us. Here are a couple of jackets (books coming soon) with different lettering added. As you will see, sometimes we have to play around with the artwork to make the lettering fit. And do you see how some colours ”˜pop’, others are a little flat, and some are a bit too much?

Non-illustrated jackets
We come up with the concept for most of our non-illustrated jackets here in the office and then send a brief to our jacket designer Rich. For the most part Rich follows this brief. Sometimes he ignores it, which is OK because he often does something much better.

For many of our authors we have a ”˜look’, a little like a brand. For Kevin Brooks, for example, we use a specific layout combining flat colour with manipulated photography and the same typography style:

For some authors we use typographic jackets ”“ i.e. there is no picture. This approach works well for Keith Gray’s books for us, for example, because Keith uses great titles and writes seriously atmospheric stories.

These jackets may look simpler than an illustrated jacket at first glance but there is a huge amount of work in getting the type right, adding texture and movement and balancing and ”˜popping’ the colour. The Return of Johnny Kemp, for example, has multiple Photoshop layers underneath the text to build up the impression of a shadowed wire fence against an old wall. Each letter has been jogged a little out of alignment to add movement, and there are texture layers, colour variations and brushwork on the type to add depth and interest.

Some jackets take a VERY long time to get right. When we published Over the Line by Tom Palmer, we especially wanted to do it justice, because it is the true story of a hero of the trenches. We started out with a fairly traditional brief of overlaid archive photos and traditional type, which you can see on the left below. It’s a perfectly fine (if rough) jacket, but we felt it looked too much like a non-fiction book and too adult. We decided to try a fresher palette, more modern typography and a football. It still didn’t feel right. In the end Rich and our MD Mairi spent a LONG afternoon and evening in the run-up to the Bologna Book Fair playing with different options and came up with the final jacket. For Tom’s name, they used the branding we use on his other books for us, which makes the book feel ”˜ours’ and ”˜modern’. They kept the archive image of footballers in the trenches, which we loved, but they pulled it back into the cut-out behind the type. They used a fresh but still very evocative red, white and blue palette cut with black for the trenches, and Ollie Cuthbertson’s brilliant page vignette from the inside of the book was pressed into service. The whole story of the book is of men buried in the dark of the trenches, dreaming of football as an escape, and we hope that the jacket communicates this idea.

Getting the faces right
Different readers have different preferences when it comes to seeing photographic faces on book covers. Some people feel that faces can make it harder to imagine characters in any other way. Other people like the visual cue an evocative face gives. We often use a face in profile or partially darkened in respect of the former preference but we do at times use full-face shots. Choosing these is not easy and some of our jackets have had many faces in different drafts, like Iris and Nate here in L. A. Weatherly’s Soul Mates:

Sometimes we come back to a face we have considered but not, in the end, used. The boy on Dumb Chocolate Eyes by Kevin Brooks, for example, was initially considered for Brock by Anthony McGowan. We remembered him when we came to choose a boy for Dumb Chocolate Eyes and he sat so perfectly within the design that it was obviously meant to be.

The really fun stuff ”“ foils, glitters and other ‘finishes’ 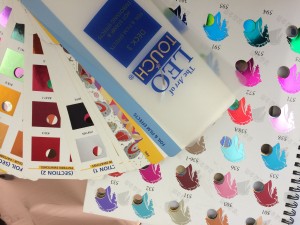 We love cover ”˜finishes’ such as foil, glitter, glow-in-the-dark ink and spot UV – spot UV ”“ a glossy varnish applied to highlight particular areas of an otherwise matte cover. We use  special ”˜decks’ of effects (right) from our printers to select the finishing we want to use and then weigh up the costs before we decide whether or not it’s possible for a particular book. We’re quite adventurous ”“ we have used glow-in-the-dark ink for a story about cheesy nightmares and another about a worm who dreams of becoming a glow-worm, and spot UV on one specific title in tiny quantities to draw attention to a reflection in the main character’s eye. We use a lot of foil and once or twice have foiled an entire jacket. We’ve even added pull-out stickers in the back of a book and a tweeting canary soundchip.

When is the cover designed?
The absolute latest most book covers must be ready to be shown is the A.I. (Advance Information) deadline, six months prior to publication. For books we think will be of extra-special interest to booksellers, we often need to produce information at least nine months in advance, and we do our level best to have cover images for all of our January to June books for Frankfurt Bookfair the previous October, and July to November books for Bologna in March. That means a lot of adrenaline-fuelled nights at the computer for Rich”¦

A VERY different jacket”¦
If you’re interested in cover design, you might enjoy our post from February 2014 on the very special jacket of Tilly’s Promise by Linda Newbery, which was created in embroidery inspired by the embroidered cards soldiers sent home from France during WWI.

And, just for fun, here are a few of our favourite covers from other publishers at the moment.

For children and young adults we love Cleo by Lucy Coats, from Orchard Books. Moondial has been given a gorgeous new jacket by the clever Faber team and the Irish dream team of Oliver Jeffers and Eoin Colfer’s Harper Collins collaboration Imaginary Fred has a stunning cover.

For adults we love the mid-Century look of the Vintage edition of The Master and Margarita and the stunning foiled design of The Book of Strange Things by Michel Faber.

Have you spotted any particularly great covers recently?