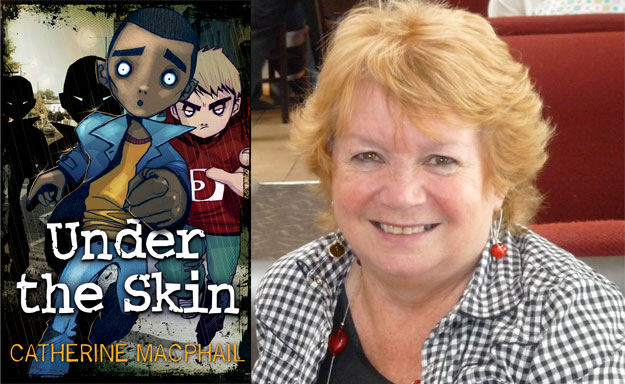 Under the Skin is one of my favourite Barrington Stoke titles. It was first published in 2007 and it has been constantly in print since. It had a cracking new edition in 2012, with a new cover.

Under the Skin‘s hero Omar is a refugee in the UK and the book opens with a letter that he writes to his cousin back home. He makes his new life sound idyllic! Rather quickly we realize that the reality is quite different; home is challenging and Omar’s supposed ”˜best friend’ Sam is actually making his life a misery both in and out of school. Omar is actually very lonely.

But this is not just a sad book, tackling a difficult topic. Omar is a real child with his own, funny take on his new world. There are many hilarious moments as Omar gets to grips with the English culture and language and unpicks our odd turns of phrase.

“She’s as deaf as a doorpost, Sam says. I don’t understand why people here say this. You expect a doorpost to be deaf. It doesn’t have ears, does it? English is a very funny language.”

Omar is also clever and feisty ”“ he gets into trouble at school because he fights back and we come to realize he and Sam have quite a bit in common. The often brutal situation does come to a head and although they do not become best pals, they do start to come to an understanding and Sam learns a few shocking truths about Omar’s background.

There’s tons to think about in this short, wonderful book ”“ but it doesn’t feel like an ”˜issues’ book at all. For all the heaviness of the storyline, there’s a lightness of touch in the writing and the characters are real and relevant.

Under the Skin is by the marvellous Cathy MacPhail and is illustrated by Tom Percival. You can buy Under the Skin here and read the first chapter below.