In March I have a new book out with Barrington Stoke. Over the Line is about a group of footballers who signed up to fight in the First World War. In particular the book is about Jack Cock, who went on to survive the battles at the Somme, to win medals for bravery and ”“ in 1919 ”“ to score England’s first post-war goal.

Even though I have written Over the Line ”“ reading numerous books and original documents ”“ it is hard for me to imagine what it must have been like to be a soldier in the trenches. It will be hard for the book’s readers too. How can we get our heads round millions of men dug into the mud, firing thousands of tonnes of explosives at each other? For four years? You can’t.

Barrington Stoke have tried to help me overcome this. Soon they will publish a website ”“ Reading War ”“ about reading around WWI. It features Linda Newbery’s book, Tilly’s Promise, and Over the Line. It includes videos, texts, documents and other sources that we hope will help engage children with reading about WWI.

For my sections, I decided to go to the Somme to make short videos about some of those settings and about my characters, who are all based on real soldiers/footballers from 1914. Three of the places I visited are very important in my book – Delville Wood, Sid Wheelhouse’s grave and some of the reconstructed trenches.

This is Delville Wood. It was the site of a terrible battle during WWI, where hundreds of soldiers were killed. Visiting the wood was shocking because you can still easily make out the craters in between the trees where shells must have fallen during the battle, killing soldiers. I have stood in one of those craters and it was not a good feeling. But I think it helped me to write the book. 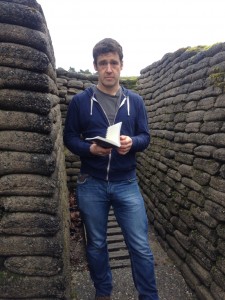 These are reconstructed trenches. In 1915 the trenches were supported by sandbags. There would have been a lot of mud and water around. The trenches would collapse and be filthy and dangerous, not even thinking about the bullets and bombs flying around. So these trenches aren’t really much like the trenches of WWI. But they are a good starting point to try to imagine the conditions millions of soldiers lived in week after week, underneath the open sky and its rain, snow, hail and hot sunshine. That’s what Over the Line is trying to do too. To reach some of the way into understanding what it might have been like – to help the reader taking that imagining further. If they want to. 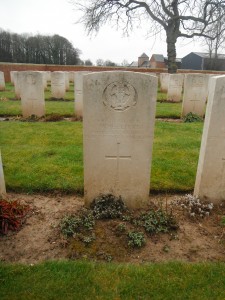 This is Sid Wheelhouse’s grave. Wheelhouse was a defender for Grimsby Town as well as a soldier in WWI. He was one of the men in the Footballers’ Battalion and is a major character in Over the Line. Visiting his grave two years ago made me understand that I had to make sure I had my facts right in writing the book. It was very upsetting, in fact. But I think I needed to be upset like that to make the book more than just something I had made up in my head. How could I write about characters like Sid and Jack without feeling something like that?

You can read about all these settings in Over the Line. Very soon the videos I made out in the Somme will be up on the web too. I hope they are a useful tool in helping children to understand the book.

Over the Line will be published on the 15 March. Check back here then for title information, chapter sample and where to buy.