I suppose this isn’t really a ”˜making of”¦’ because I didn’t write this book. That was Cornelia Funke who I think one or two people might just have heard of so I’m not going to try and take the credit for that. I did do the pictures though so, for your information and entertainment, I’m going to reveal all my artistic secrets and tell you how I illustrated The Monster from the Blue Planet.

To start off with I’ll show you where I work. This is my desk. I wish I could tell you it’s usually tidier than this but that would be a lie. I share a studio in Cambridge with lots of other arty types and drink industrial amounts of tea. 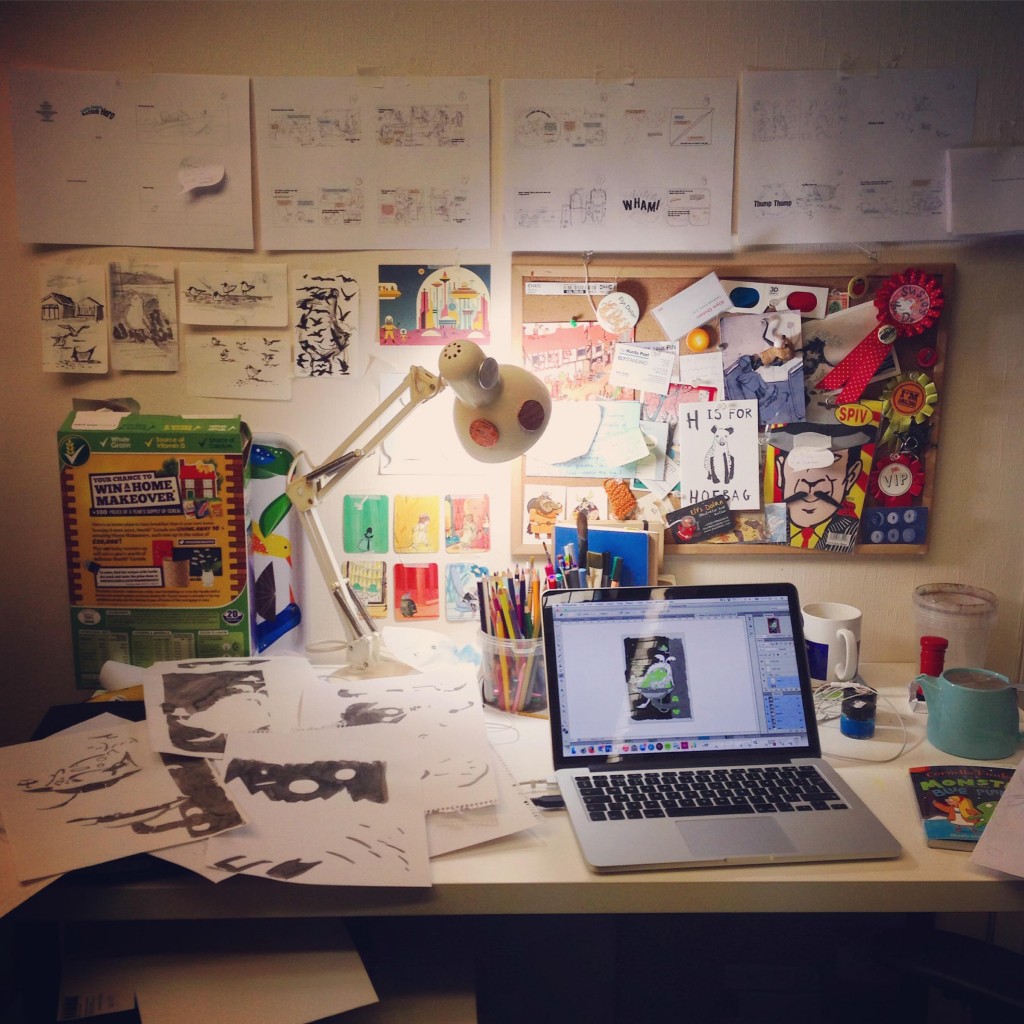 It’s at this very desk where I’ll sit down and go through briefs to see if I want to take any of them
on. I knew as soon as I saw that this book involves both a fridge monster and a dragon that I
wanted to illustrate it. I’ve not had the opportunity to create an alien world before so I thought this would be a nice challenge.

It turns out a challenge is exactly what it was. Designing Zelab, the alien star of this story, wasn’t
easy because I wanted her to look strange and obviously alien but not be so weird looking that
nobody would like her. The text doesn’t give many clues to her appearance. The only hint is when talking about humans it says ”˜They had no fur and only two eyes and two arms each’ which suggests that the aliens are furry with an abundance of eyes and arms. So I took that as my starting point and designed Zaleb accordingly: 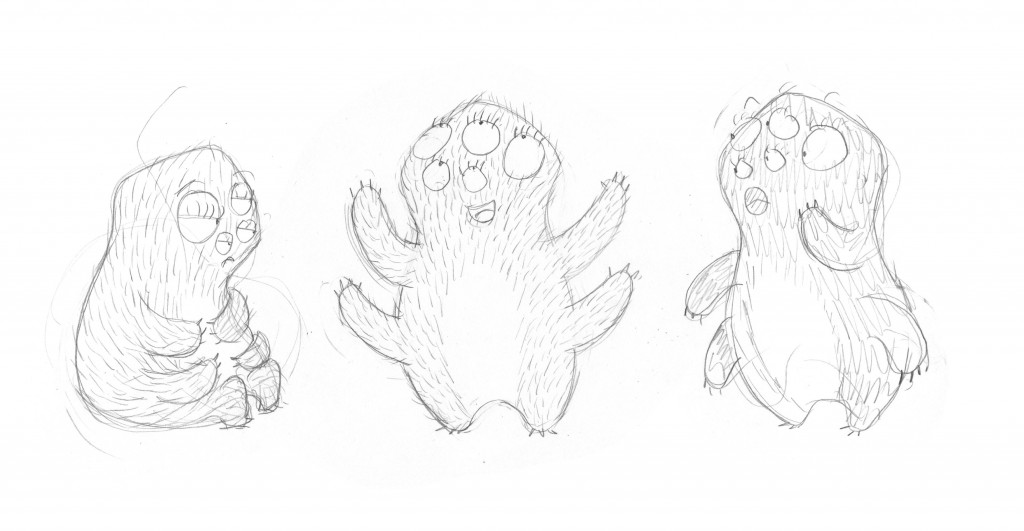 I really went to town with the quantity of eyes. In fact I took the copious eyes as a starting point for designing the alien land that she inhabits. I wanted it to be a world where the inhabitants would instinctively make things round and circular, to reflect their appearance, whereas here on earth we tend to go for square and angular.

This was my main influence when coming up with Zelab’s house. I wanted to incorporate lots of
rounded edges and circular windows. It came out looking like a cross between a Frank Lloyd
Wright house and a jelly, which I rather like. The story mentions that the houses are high rise so
instead of creating some kind of tower block I thought it would be nice for their building to be
almost tree-like with individual houses on each branch. I wouldn’t mind living there myself. 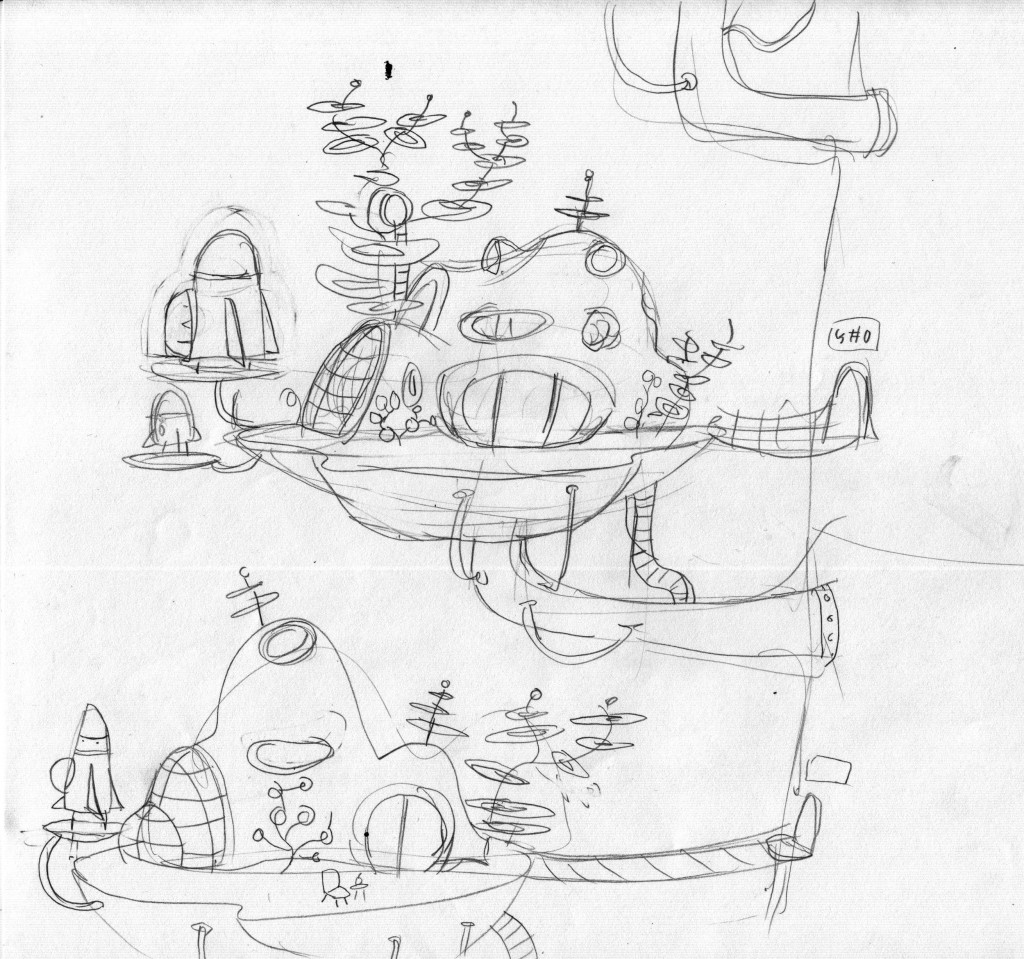 Izzy was a little easier to design because I already knew what people look like. I didn’t want her to seem like an overly ”˜girly’ girl. She’s the kind of person that gets excited about being kidnapped by an alien and taken to its home planet so she’s obviously on the adventurous side and I wanted to show that. 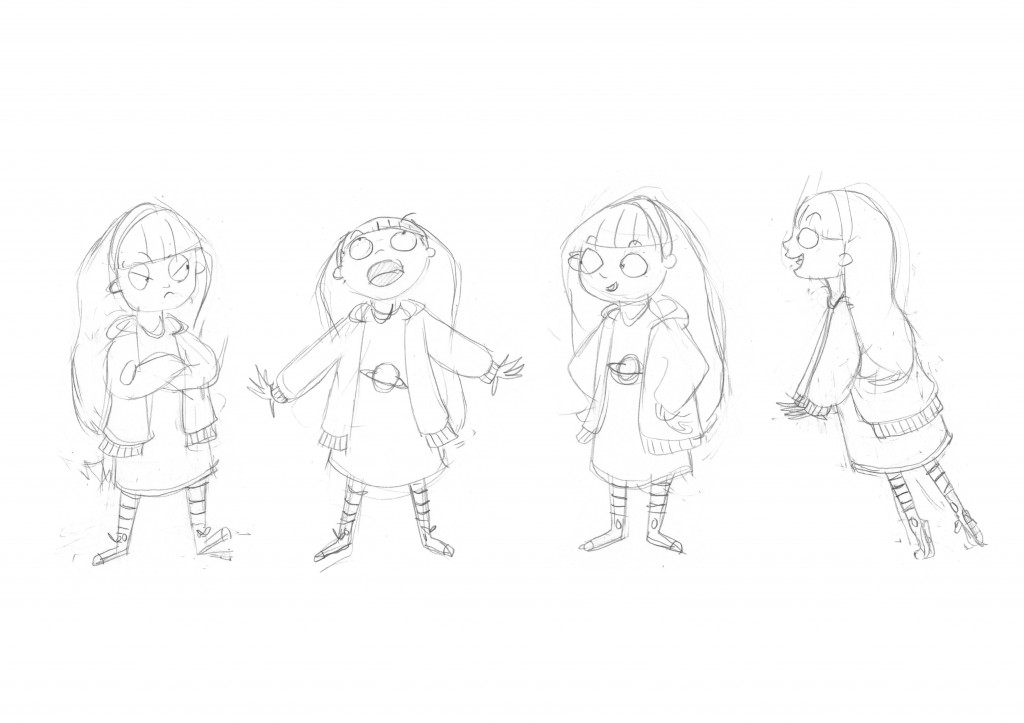 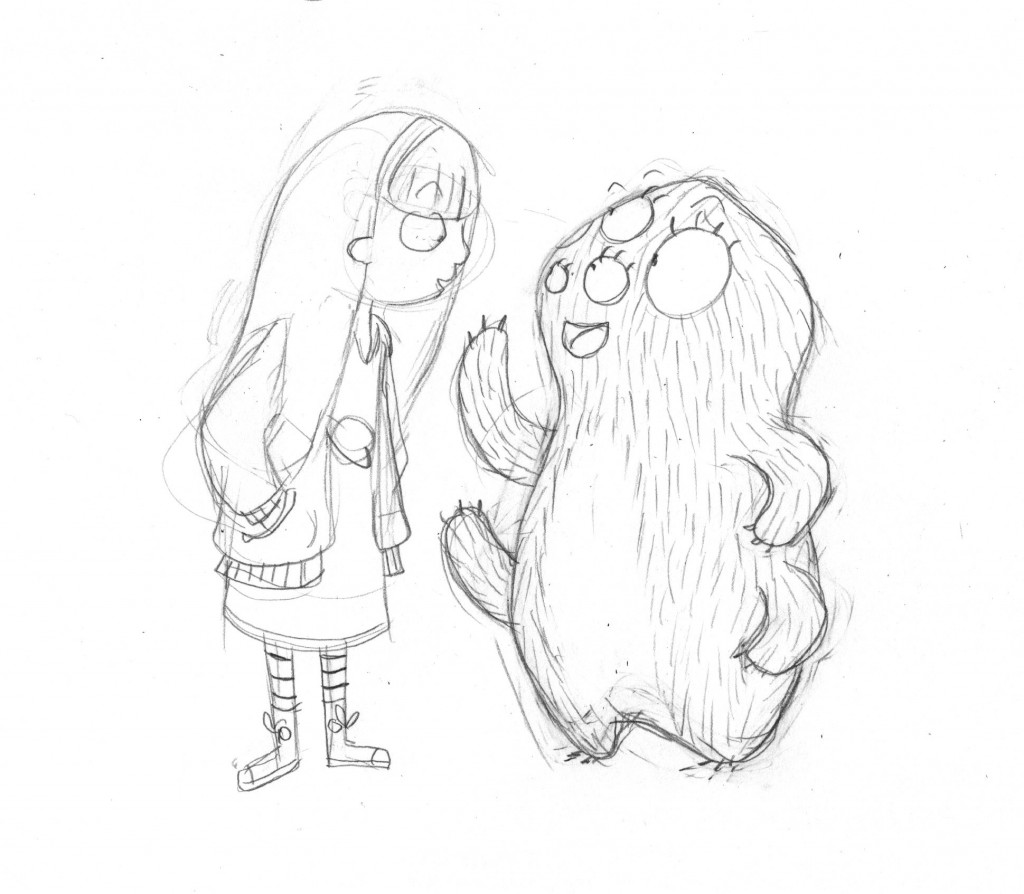 Getting her hairstyle right was tough. I originally gave her pigtails but she looked too much like a rabbit. 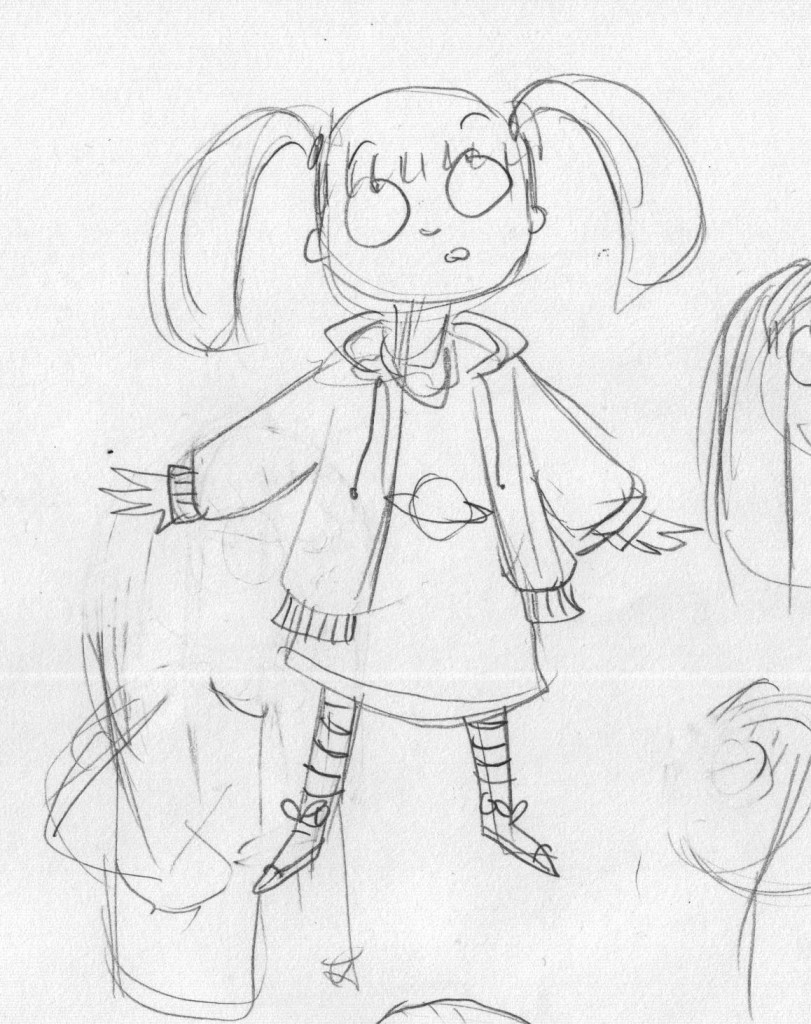 Once I knew how I wanted the universe and characters to look it was time to start the artwork.
When I illustrate a book I begin by doing a pencil rough of each image. Here’s one: 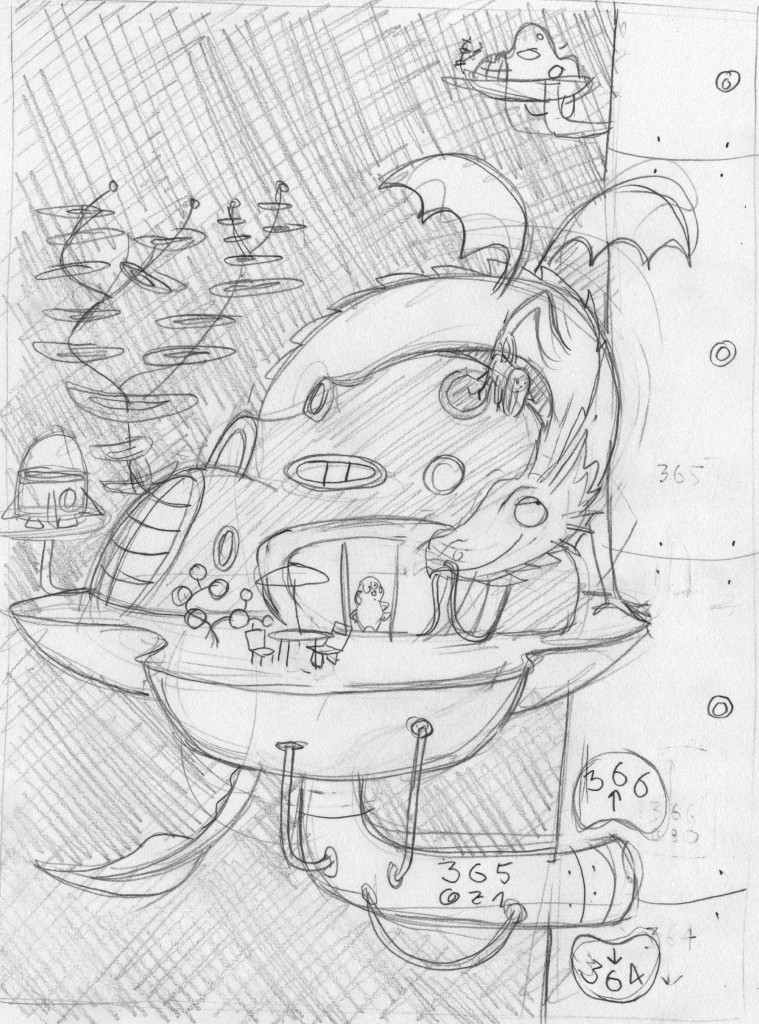 Then I’ll use a light box to trace that rough drawing in pen so I get a solid black outline like this: 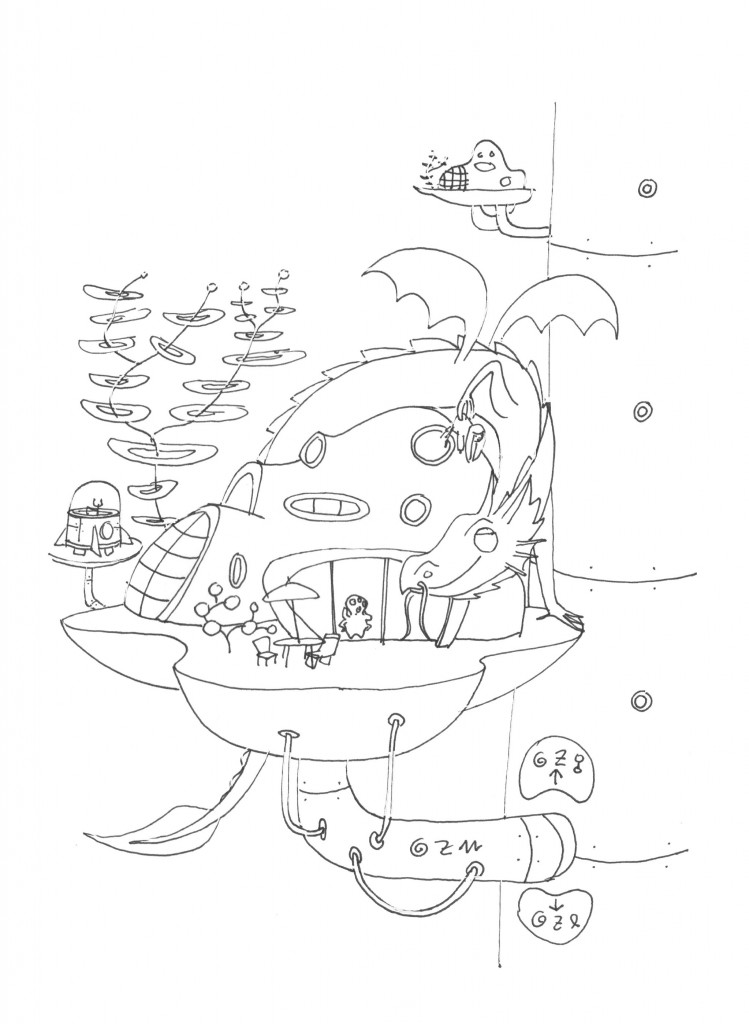 Next I need to add colour. I’d been asked to do two colour artwork for this book and I chose a
bright green as my second colour because I thought it looked fairly alien. I also selected a few
different shades of grey to use to create depth and tone. Using black ink I paint over each of the
areas that’s going to be green or one of the greys. So I end up with lots of bits of paper with blobby looking shapes on them, like these: 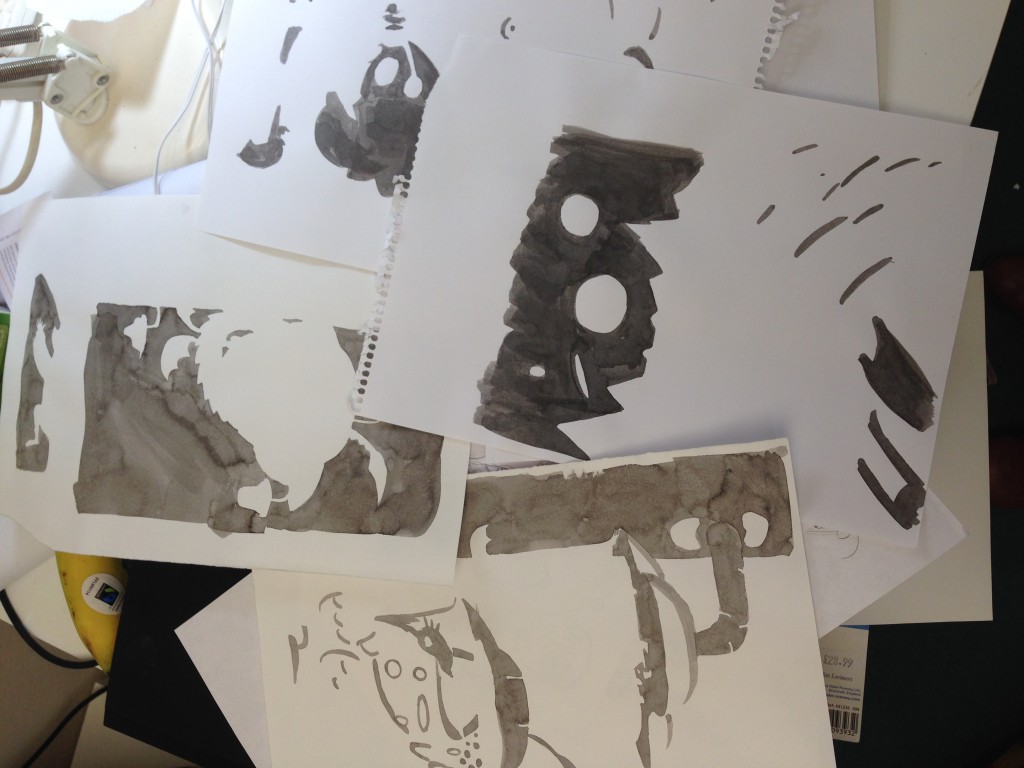 Now I scan the outline and the blobby shapes into the computer. Using the digital witchcraft that is Photoshop I make the blobby shapes the colours they’re supposed to be and layer them on top of each other. It then looks like this: 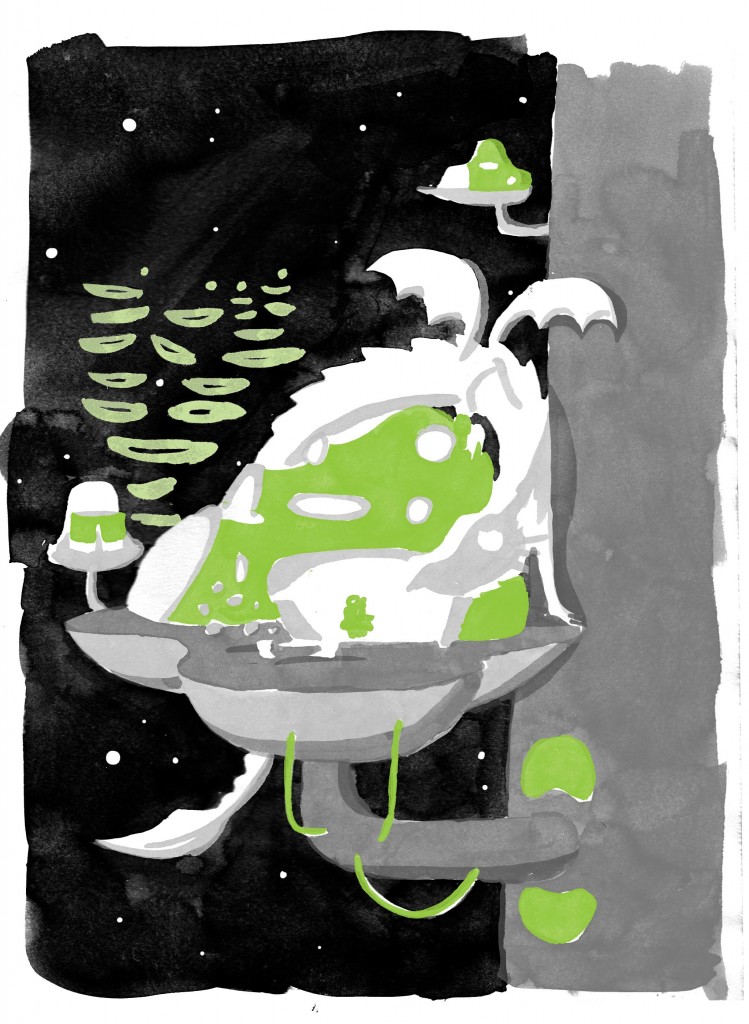 Finally I’ll layer the black outline on top of the colour to finish the image. All I need to do now is
repeat that process about 30 times to make the rest of the book. 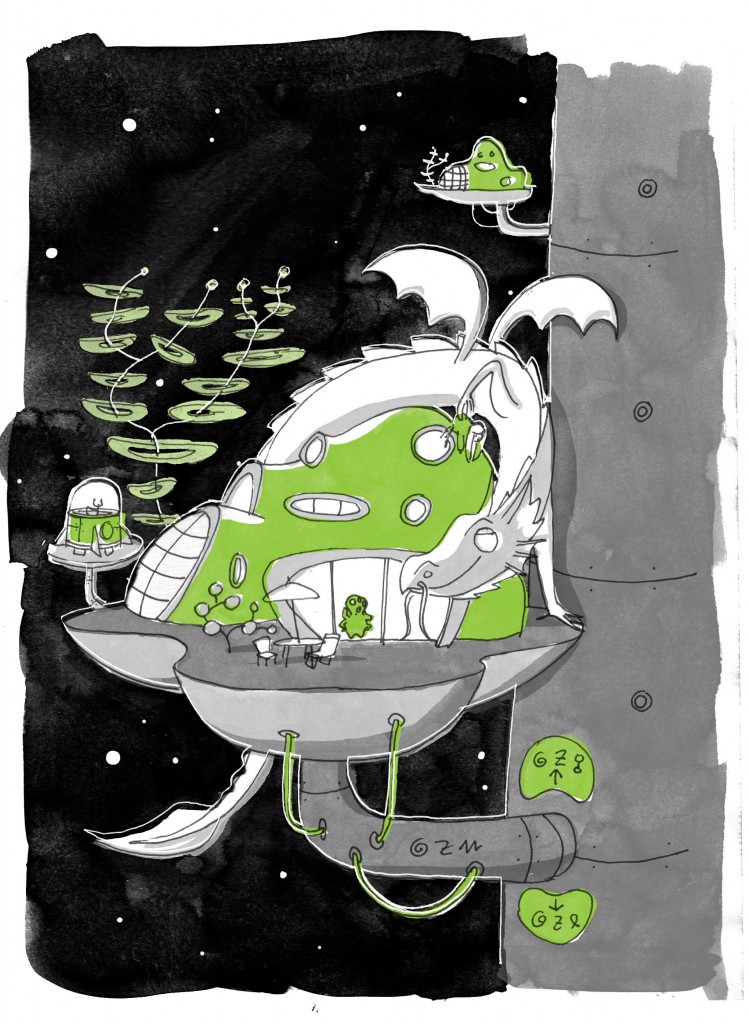 Once all the pictures are done I send them off to Barrington Stoke where ingenious designers
make them look good and package it all up into a book. Here’s the finished article in situ: 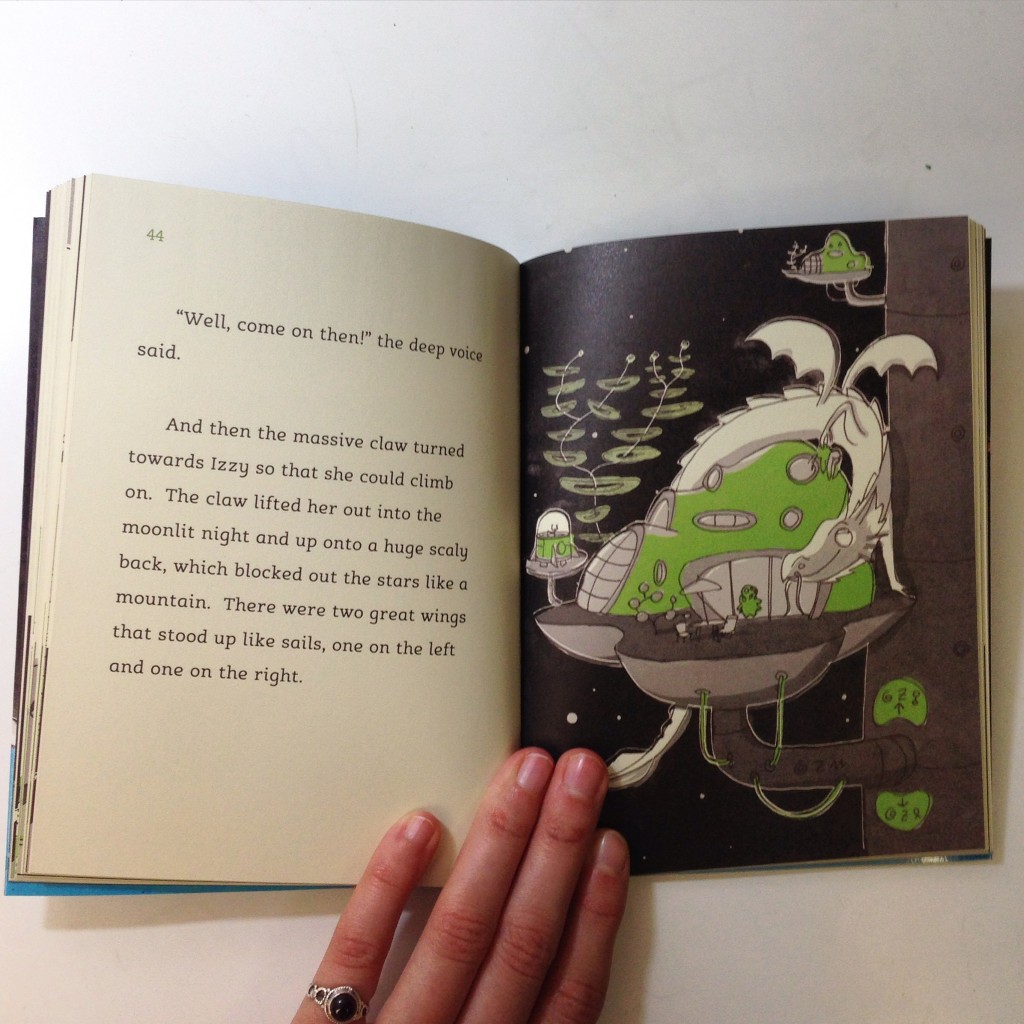 I was very impressed with how The Monster from the Blue Planet turned out. The Barrington Stoke team made my work look so much better than it actually is and packaged it up into a beautifully presented book. It was a thrill to illustrate the story of an authorial giant such as Cornelia Funke. I’d do it all again in the blink of an eye, especially if there’s more fridge monsters involved.

Huge thanks to Elys for a brilliant blog. Although we do have one correction… Of course we didn’t make her work better; her work is brilliant and she is too modest by far! Find out more about Elys Dolan on her website.