The Rugby World Cup begins tomorrow! Author of the Rugby Academy series Tom Palmer will be writing live stories alongside the on-pitch action. Tom’s stopped by the Barrington Stoke blog to tell us more.

One of the best buzzes I get from being an author is writing live stories. You could call it pop-up fiction too. Fiction that is very relevant for a short time. Fiction that lives for today, but won’t be read tomorrow. I’ve done it before. Writing thrillers set during a major football tournament. Writing each chapter the night before publication and uploading it in time for it to be read aloud in school the next morning. Chapters with events that happened less than 24 hours before. 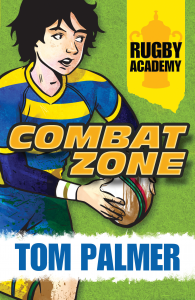 Children seem to like it. They enjoy the live aspect. They like the outrageous cliffhangers. They like being able to vote on what happens next. And ”“ of course ”“ they like being read to. Let’s not forget that.

This time my pop-up fiction is about rugby. The Rugby World Cup kicks off tomorrow and it’s being played in the UK. Chapter one starts with the three heroes of my Rugby Academy trilogy ”“ Woody, Owen and Rory ”“ attending a reception at Twickenham to launch the tournament, starring the World Cup itself, shimmering under the lights. Then those lights go out. And, when they come back on, the trophy is missing. Our heroes ”“ with the help of Rose, an enigmatic girl who appears ”“ are charged with solving the mystery. That’s all I know, really. Whatever happens on and off the pitch at the Rugby World Cup will determine the events of the story. That and the children’s votes.

To keep the story as live as I can, I need help
I need ears on the ground at Twickenham Stadium. I am very lucky to have the help of a group of children from the primary school next to Twickenham: Chase Bridge. The children will be finding out facts for me, so that the story is as true to life as possible. They’ll also be talking to me via Skype about what I’m planning. They’ll help choose the direction of the story.

Writing pop-up fiction is a challenge. There is a lot of pressure involved when writing a story that must be published less than 24 hours later. I wait for interesting events in real life that will affect the plot and characters of the story. I have to create borderline-crazy cliffhangers to make the children want to read more. My confidence is up and down like a yo-yo. Before I upload a new chapter, I always show it to my wife. She often has some great suggestions, though that means I can be up writing until after midnight.

The Twickenham Trials starts today with chapter one
You can read that here. It is the only chapter not written the night before publication. The remaining chapters will be published before 7am every weekday morning for 23 week day mornings in all. You can see a video of me reading chapter one here.

This story, along with a large amount of literacy resources based around the Rugby World Cup, have been funded entirely by England Rugby.

Thanks, Tom! Will your class be taking part in the pop-up fiction event? Tweet us using #ReadRugby.