In the latest instalment of our If I were in charge of the world series, we’ve tracked down Anthony McGowan and asked what 10 laws he’d pass if he suddenly achieved world domination. Anthony is a award-winning writer and author of the Carnegie Medal-longlisted Brock and its companion Pike.

1. Ban the internet. Something terrible has happened to our culture. The internet has reduced knowledge to random bits of information. It has stolen our time, and made us less productive. It has taken us away from the real world, and replaced it with a simulacrum. It has made us delighted to see that some cats look a bit like Hitler, instead of fighting to make the world a better place. Its freedoms are illusory, its promises all lies. And I speak as an addict ”“ who better to witness the dangers of drugs than a hopeless smack-head?

2. Everyone has to carry a device that gives us a small electric shock whenever we said anything banal or stupid or lazy – the sort of everyday platitudes that we absorb from the cultural trash that flows and flops around us. This would force us to adopt novel and interesting modes of thought, to look at things through our own eyes, to analyse and probe. It would also silence the idiots.

3. No item of clothing can cost more than £100. We live in a vain and shallow world, where the rich buy glamour, and the rest of us are goaded into envy. If fashion is no longer something you simply buy, but becomes a way to express yourself creatively within certain financial constrictions, then, I suppose, that’d be some kind of advance. But in reality I wish people would stop caring so much about how they look, and cultivate their minds a bit more. Including me.

4. Everyone has to read a poem whenever they go to the lavatory, and they’re not allowed to leave until it’s finished. I’d publish a series of anthologies for the purpose, made up of very short poems, for very short visits, and longer poems for when more time is required. By this simple means, the world would be a better place.

5. Ban food writing. We’re all too obsessed with food. Food isn’t art, and people should stop droning on about it. Or, rather, food is art for idiots. What’s the greatest period of human culture? Ancient Athens. What did they eat? Black porridge. That’s it. Any culture that spends more time on food than philosophy is doomed.

6. Increase break/play time in schools. This is a moderately serious point. Years ago I worked for the Department for Culture Media and Sport. One of my jobs was to look into all the available research on activity levels in school children. When they put heart monitors on kids, they found that their heart rates went through the roof during break time, and were significantly higher then than during PE lessons. I put all this in a report, which got buried, because no one wanted to hear it. We want fitter, healthier kids? Then let them play more.

7. Subsidise the cost of state school kids going to university by charging extra for those who went to private schools.

8. Privatise the Monarchy. Take back any property which has been subsidised over the years by the state, and remove any official roles they have. Then let them do what they like, call themselves whatever they want. They can charge people to come and say hello. You could buy a Knighthood for £750. 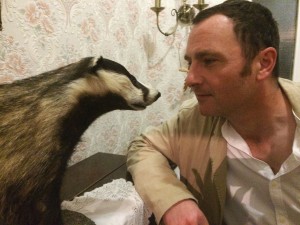 Anthony McGowan talks Brock with his No.1 fan

9. Nationalise all farmland. Create a mixture of productive, unintensive farming, with wildernesses, open to all.

10. Reintroduce the wolf, lynx and beaver. Not just into the wilds of Scotland, but everywhere. Let’s make that commute into work more interesting, with bears in the tunnels of the Underground. Wolverines could help control inner city rat populations. London’s squares and parks should echo to the mournful cry of the moose. Every canal should have populations of hippo and crocodile.