We’re honoured to announce that we’ll be publishing The Family Tree – a tender-hearted novella from the much-missed Mal Peet, illustrated by Emma Shoard.

This beautiful exploration of childhoods and families will be illustrated in soft and sensitive watercolours and ink by Emma Shoard, who’d previously worked on bringing Siobhan Dowd’s The Pavee and the Buffer Girl to life.

Read our release for more information. 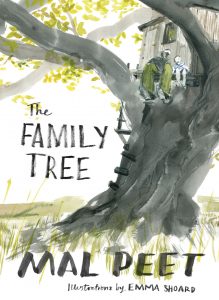 Barrington Stoke are honoured to announce the forthcoming publication of a YA novella by the much-missed Mal Peet, a writer of extraordinary talent whose words continue to touch readers of all ages. The Family Tree is an utterly compelling and powerful exploration of families and fathers, in which the unnamed narrator returns to his childhood home and recalls with adult eyes the breakdown of his parents’ marriage and his father retreating to live in the garden treehouse.

Elspeth Graham says of the story:

“The idea came from an old orchard we found when out walking near Tipton St John – there were several treehouses in various states of decay built into the taller trees. They really interested Mal; he was completely fascinated by them.”

“We are tremendously honoured to publish the much-loved Mal Peet for the first time, and thank Elspeth Graham for making this possible. The Family Tree is a thought-provoking and tender-hearted story, which illuminates its themes of fatherhood, memory and guilt with all the clarity and depth of feeling for which Mal is so admired. In sparse, beautiful prose, The Family Tree tells of how the long-ago unravelling of his childhood still impacts on a young man, as he returns to the derelict treehouse where his father once lived. An awkward encounter with a new family offers redemption of a kind – but no easy answers. Emma Shoard’s sensitive, impressionistic artwork enhances further the emotional resonance of this rare treat of a story.”

“After much anticipation, I am so happy to be working on this beautiful story by Mal Peet. There is so much depth and reality to the relationship between his characters; I hope to illustrate something of those spacious places he has created in between the lines. The huge, ancient beech tree at the centre of this story is a real treat for an illustrator.”

Mal Peet was a multi award-winning novelist best known for his young adult fiction, including Keeper, Tamar and Life: An Unexploded Diagram. His novels were nominated for and won prizes such as the Carnegie Medal, the Branford Boase Award and the Guardian Children’s Fiction Prize. In 2017 novel Beck – completed after his death by his good friend Meg Rosoff – was nominated for the Carnegie Medal. Mal passed away in March 2015.

Emma Shoard is an illustrator and printmaker who graduated in 2011 from Kingston University’s Illustration and Animation course. Her work includes our highly illustrated edition of The Pavee and the Buffer Girl. Emma’s stunning “light-filled” artwork helped to bring this first published story by the acclaimed Siobhan Dowd to new life and new audiences in 2017. Emma lives in London on a barge on the Thames.